The dismal realities, political or otherwise, that are part of our modern world naturally influence our creative voices. It is in this context that White Hills re-evaluated their approach to creating a new album. Having continually refined their sound, pushing the boundaries of psychedelic music, White Hills flipped the script on Stop Mute Defeat. Dave W. and Ego Sensation have brazenly produced an industrially-charged record that pulsates unlike anything they’ve released before.

Hard-line, gritty, and intellectually engaged, Stop Mute Defeat is a New York record through and through. With this in mind, White Hills drafted Martin Bisi (Sonic Youth, Brian Eno, Afrika Bambaataa) to mix. White Hills recorded with Bisi on two of their previous releases, Frying On This Rock in 2012 and its follow-up So You Are…So You’ll Be, however Stop Mute Defeat is the first time they worked with Martin “The Beast” Bisi in control of the mixing board. A native New Yorker who made his name in the city’s early hip-hop and no-wave scenes, Bisi was attracted to White Hills’ new material for its distinct early-80s Mudd Club feel. A dance hall, drug den, and bar, the Mudd Club was one of New York’s legendary haunts in the late 1970’s. As a center of a distinct art scene the club served as a major influence for White Hills and Stop Mute Defeat’s sound.

Appalled by the rampant consumerism and the proliferation of ‘post-truth’ mythology, White Hills’ defiant lyricism is at their most philosophically scathing. Condemning doublespeak as “Subliminal seduction…a serenade with a grenade,” the song “Overlord” laments political and economic opportunism, where “In travesty, [there’s always] another dollar to be made.” On “Attack Mode” meanwhile, a clenched-jawed Dave W. channels the perverse cynicism of Throbbing Gristle, throwing scorn on “societies where misogyny leads and the objectification of young girls runs free.” Exposing Western vulgarity in bright light, Stop Mute Defeat is a fearless and necessary denunciation of the political and economic powers that be.

Between the release of 2015’s Walks For Motorists and the making of Stop Mute Defeat, members Dave W. and Ego Sensation took time out to focus on other artistic endeavors instead of keeping up their pace of an album a year. Diving deeper into the world of video, Ego has produced and exhibited a series of “Moving Stills”: videos that imbue static images with a subtle, uncanny motion. In these pieces, realism morphs with itself to create abstract visions. Through Dave W’s obsession with meditation, he was drawn back to his love of form and image, creating a series of sculpturally based hallucinatory abstract paintings in which the viewer is sucked into infinite space. These forays outside of music were instrumental in the shaping of Stop Mute Defeat.

Writing in his seminal postmodern oeuvre Naked Lunch, Burroughs states: “Desperation is the raw material of drastic change. Only those who can leave behind everything they have ever believed in can hope to escape.” Rethinking their musical norms, personally and musically diving into uncertain waters, White Hills at once embrace and demonstrate the raw power of such abandon.

Check out the White Hills app! 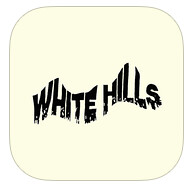